We had thought that our campsite was going to great, close enough to Cajon Pass where we had planned on getting picked up to return home for a rest but far enough to still be away from civilization.  Wow we were wrong!  Being six miles from the trailhead was fine in regards to not hearing traffic on the I-15 freeway but definitely wasn’t far enough from the countless trains that were hauling freight containers up and over the pass all night long.  When I say all night, I mean ALL NIGHT!  Not only could we hear the engines straining to get up the hill, but it appears they must cross roads about 10 different times as they climbed up the hill.  The reason why we know that, is that each train would blare it’s horn at every crossing.  The sound of the horn was clearly heard at our tent site every time they did this, which made sleeping pretty rough.  Amy who uses earplugs for sleeping said she was awoken by them every time as well, which tells you how loud it was.

The other issue affecting our sleep is that our sleeping pad leaked again last night.  It doesn’t seem to completely losing air but I haven’t been able to determine the probable hole.  Definitely going to have to figure this one out when we get home.  We both tend to be more side sleepers and with a half inflated air mattress it makes it hard to not have your hips, shoulders and knees hitting the ground underneath you.  When combined with the colder temps we had last night it makes it tough to be in one position for long without pain waking you as your body wants to switch positions.

We had set the alarm for 6:00 and were up in the cold morning getting ready to get home.  Do to our mishap in our resupply box we were each down to a coffee, one flat fruit bar and a granola bar as our breakfast.  The morning was going to be mostly downhill and with the cooler weather we figured that would be enough to get us to the trailhead.  Our good friends Amy and Joe were picking us up and told us they were grabbing some breakfast burritos to for the ride home.  So we were pretty motivated to get there.  We hit the trail by 7:00 and knew that if we got there early we had an option of having a first breakfast at McDonalds if we needed to feed our hunger.

The skies today were a mixed bag of cloudy (looking like it might rain) and blue skies.  We passed two other tents but no one else was up stirring yet, probably still trying to sleep after waking from the trains.  We actually had some really surprising views and topography this morning as we descended to Cajon Pass.  We ran into a few runners who were out using the hills for a good training run.  The first one we ran into was an older women making running up these steep hills look ridiculously easy.  As she approached she through her arms up in the air and asked “Are you two Thru Hikers?”.  We said yes which brought the biggest smile to her face, saying that she was so glad to see us and that we were the first ones she had run into this year.  She obviously is out here running frequently but with the low number of hikers she just hasn’t come across them.  She made us feel like celebrities and after a short conversation about how we were doing she wished us luck before darting off uphill on her continued workout.  It has been really nice to come across so many people excited to see us out here. 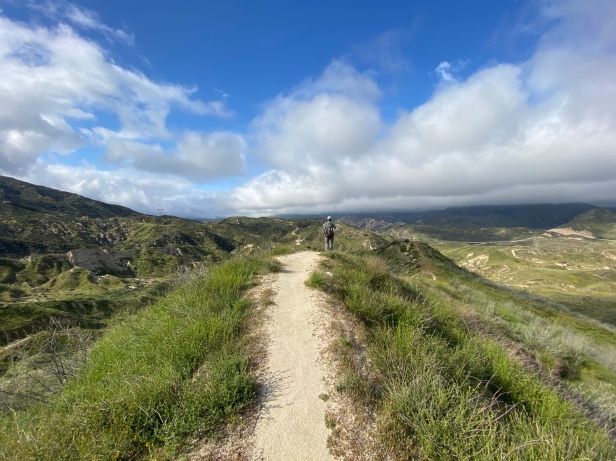 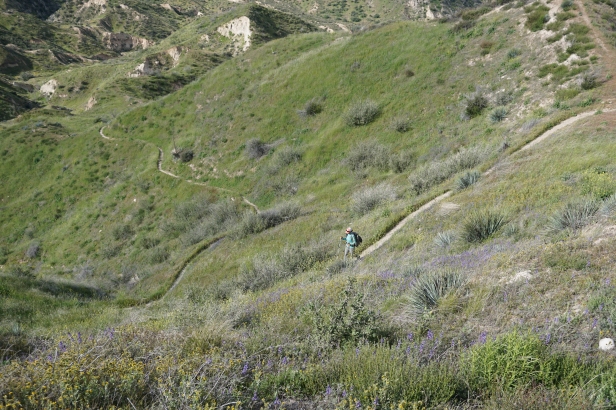 The last part of the morning we were walking through a canyon with water flowing down a stream and wildflowers every where.  Then we turned the corner and BAM, there it was the I-15 freeway and a truck weigh station.  Talk about being thrown back into civilization in the blink of an eye.  It is funny that at this point they even have a sign for the PCT showing that McDonalds is only 0.4 miles away.  Many hikers will use this to recharge their stomaches and electronics (on a normal year when you could sit there).  As we walked toward McDonalds and our pick up spot we thought we would be there early so we started to talk about what we would order from McDonalds if they were letting people walk in.  It’s funny thinking about McDonalds as Amy and I can’t even remember the last time we went, but it was sounding really good at the moment.  We got even better news though.  Just as we walked up to the McDonalds we got word that Amy and Joe were just getting off the freeway, what great timing!

Not only did Joe and Amy go out of their way to drive out to Cajon Pass just to pick us up and return us home but they had stopped by one of our favorite breakfast places, Brother’s Burritos to grab us breakfast.  Amy had even baked some homemade chocolate chip cookies for us.  This was WAY BETTER than anything we could have ordered from McDonalds!!  We gave each other air hugs and we were then off heading for home for a short rest.  It was so fun catching up with them and the drive home seemed to fly by.  I can’t tell you how LUCKY Amy and I are to live here in Southern California but more so that we have such supporting and loving friends who are going out of their way to be our  Trail Angel system.  We know that no one else out here right now has this and we definitely don’t take it for granted.  We can’t thank all of our family and friends for the support they have provided. 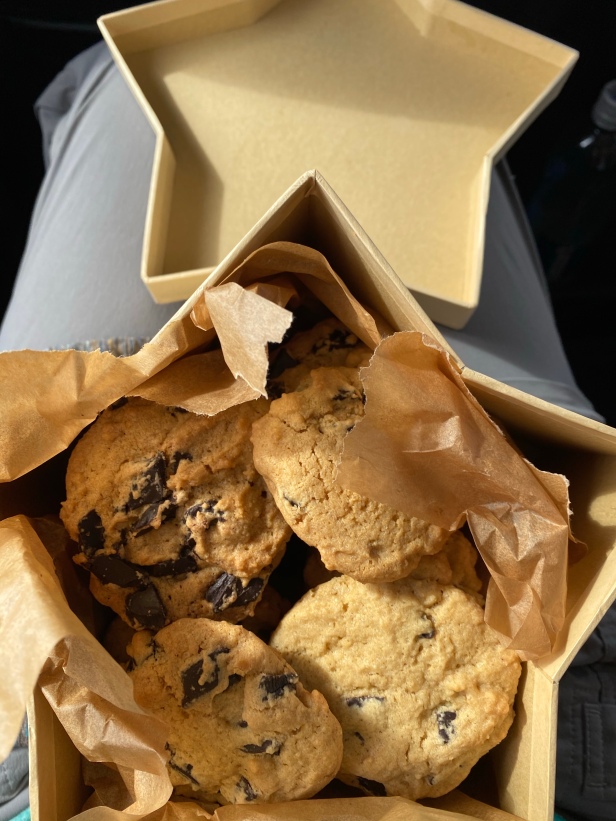 After getting home and first getting cleaned up so that our kids would actually like being within a five foot distance from us we grabbed some more food and then I went to work on the air mattress.  After an hour and a half of using soapy water, dunking the pad in a bathtub looking for leaks I was about to give up.  I then inflated the pad one more time and grabbed my daughter, hoping that her good “young” ears could do something I hadn’t been able to do, find the leak.  We both got down on the pad and started our search.  I had a general idea of where the leak might be but was so far unsuccessful in finding it.  After only about 10 minutes Maddie had located a pin size hole leak that was only apparent when the pad was stretched.  SUCCESS!!!  I have been able to patch the hole and the pad is holding air like it was weeks ago.  Still have no idea how it happened but I was ecstatic that I wasn’t going to have to purchase a new pad.

We are now going to be at home for a few days.  We will use this time to plan out our next leg and try to slow down a bit.  We would really like to wait until the end of May to get towards the Sierras to allow for snow to melt and to hopefully allow society to get back to normal as we continue to fight this virus.  This will help us be able to continue on our journey towards Canada with less difficulty and more enjoyment in the towns.

We will be back posting on our journey once we return to the trail within the next week, but until then thanks again for following along.  Link

14 thoughts on “The PCT Train Depot”