Well last night was very interesting!  Not sure Amy nor I got much sleep thanks to Mother Nature unleashing her wrath with the highest winds we have encountered on trail yet.  Not having much choice in campsites yesterday we ended up on a fairly exposed ridge which definitely didn’t help our situation.  I did my best to build a rock wall around our tent hoping that I could deflect some of the wind trying to rip our tent out of the ground.  I had expected to be up out of the tent to fix stakes and guidelines that I was hoping might be able to combat the forceful winds.  Hearing each gust ripping at the tent didn’t help me sleep as I was holding my breath praying I wouldn’t have to get up in the cold darkness to do repairs. To my surprise I never had to get up once during the night.  Needless to say we were both starting the day out on the tired side.  This would prove to add to the difficulty of the day.  After the horrific night we made sure to leave a helpful message to any hikers behind us thinking this spot was going to be a good one. 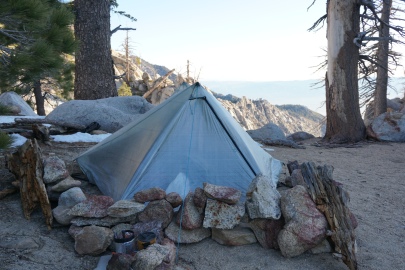 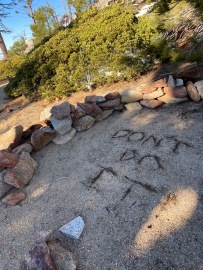 We had envisions of summiting San Jacinto today and we were excited to see what the views would look like from there, but also we weren’t sure how much snow we were going to encounter.  Well we quickly found out that snow was going to be a major factor in the day.  Not more than 300 yards into the day, our micro-spikes were out and on. Little did we know at the time that they would only come off once for a brief period of time.  Early in the morning, travel on the snow with our micro-spikes  was great, as the snow was still very cold and iced over.  I even attempted a short glissade (sitting on your butt and sliding down a hill) in preparation for the Sierras.  The snow wasn’t smooth and was very icy making this attempt pretty feeble.  Imagine trying to slide down a corrugated tin roof, that was about what it felt liked. 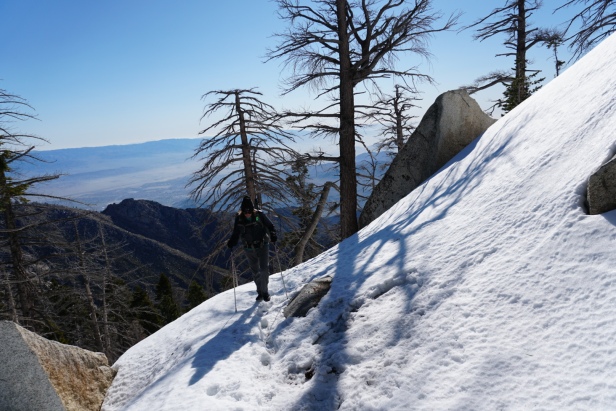 Around 10:00 we had only covered about 3.5 miles which was definitely slower than our normal pace, as we usually are around 5ish miles into the day by then. Oh the joys of snow travel.

Right around 10:00 is when the snow started to soften up as well with sun shining and the temps rising.  This resulted in Amy and I post holing more.  Post holing is when the snow underneath a foot suddenly gives way and your leg is plunged into the cold snow, sometimes up to your mid thigh.  The other issue not in our favor is that we weren’t expecting this snow depth and didn’t have snow baskets on our trekking poles, which are larger, giving you more surface area and preventing the pole from sinking into the snow as well.  Imagine this, you are standing on the snow and start to feel one foot sink, so you quickly shift your weight off that foot to prevent it from getting sucked into the snow, but your full weight goes onto the other leg which causes this to post hole.  As you lose your balance you use a trekking pole to catch yourself, only to have the pole quickly puncture through the snow all the way to the handle.  This results in you falling to the snow twisting and turning as you fall.  Needless to say that walking on the snow as the day progressed started to become a very tense situation.  Amy and I said it was the equivalent of having the glaucoma test, getting the puff of air into your eye, over and over.  You know it’s coming but you just don’t know when.  This only happened about 100 times throughout the day.

We got to the junction for the San Jacinto Peak trail around 12:30 which only put us at about 5.8 miles for the day, half of our normal miles.  Knowing that we were trying to get in another 10 miles and the trail to the peak was only going to be more elevation and an extra mile we made the decision to stay lower hoping to avoid some snow and allow us to get to the tent site we were hoping for so the next day wouldn’t be awful.  We were bummed we couldn’t bag the peak but at the same time knew this was the right decision. 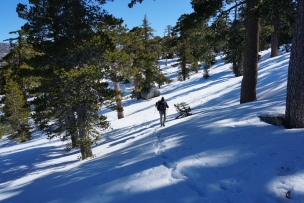 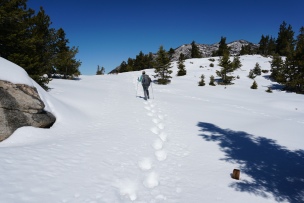 The rest of the day was rough.  We found the progress on trail very slow due to the worsening snow conditions, soft wet snow.  At about 1:30 we took a 15 minute break for lunch assessing our possibility of getting the mileage in we wanted. We pushed on really starting to feel the effects of the day both mentally and physically.  Around 3:30 we still had about six miles to go and I think we had been out of the micro-spikes for about a total of 30 minutes of the entire day.  Our feet were completely soaked from being in wet snow the whole afternoon.  This is when the reality set in knowing we wouldn’t make the  day’s goal.  It’s something we are both trying to be better with.  We are both very goal oriented but out here you just have to be willing to take what the day brings.  At about 6:30 we still had 3 miles to go and knew that wasn’t going to happen, so we started to look for as flat of a spot as we could find to pitch a tent on the snow.

Camping on the snow is something we have not had the pleasure of doing over our years of backpacking.  I had done some research and knew to use the stakes for the tent in a different way.  Instead of having the stakes go in vertically, I used a deadman’s method which is when you turn the stake sideways and bury it.  As the snow hardens with the temps falling it makes it harder for the stake to come out.  We got out tent set up fairly quickly but the sun was still setting so we made dinner in the vestibule of the tent.  Clean up was minimal since we knew we would be heading home for some rest and relaxation tomorrow.

Today was tough, hiking only 12 miles with only two breaks was physically tough and the snow travel definitely worn on us mentally.  There was a lot of quiet moments throughout the day as we both were struggling with the frustration and fatigue of the day.  Here is hoping to a better night’s sleep.  There is no wind but hopefully it will be warm enough!

Thanks again for following along with our crazy adventures.

9 thoughts on “Mental and Physical Training”