Today was our last day on the trail which always comes with a mixture of emotions. Both of us have loved the Rockies but it also has been tough physically. This trip hasn’t necessarily been any longer than others in the past nor has it been crazier in regards to elevation gains. We think not dropping below 11,500 feet and over half the trip being well above 12,000 feet definitely had its part in making us tired. Also like we have mentioned the trails really don’t use switchbacks often but instead take the direct route which can mean climbing 70 degree slopes at times. We also found that we would get tired mentally at times when crossing hillsides on a steep slope and the trail only being a foot and a half wide that slopes downhill with a 500 foot fall if you lost balance or slipped. Needless to say we both felt like our bodies needed a break plus getting home to family is such a big pull after being away. 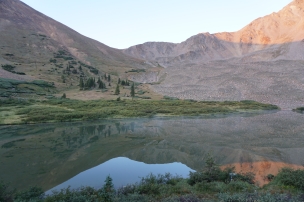 That being said we decided to get up today early for a downhill hike and hitch (hitch hiking) ahead of us. We woke at 5:50 and again were greeted with blue skies. We had seen everything we had hoped expect for the Rocky Mountain Goats. While having our coffee I scanned the hillside and then saw a group of white dots that I hadn’t seen the day before. Looking closely the dots were moving. OMG…it’s the goats we had been hoping to see. We quickly broke camp and even skipped breakfast (except for 1 1/2 tortillas each), not that either of us were craving dehydrated eggs again. Now the goats were actually heading down a cliff. Now was our chance to get a closer picture that wouldn’t just look like white dots. We threw our packs on and raced cross country hoping to get close enough for a good picture. After a quarter mile the goats I guess saw us coming and started to head for higher ground. We got a better picture but still not what we wanted. Never the less we we both were so happy to see them on our last day. Wildlife list was completely checked off!!

The hike down was very uneventful. Pounding downhill through the trees and over loose rocks only heightened our desire to reach the end. We got to the bottom at Twin Lakes Reservoir and you feel like the finish was right there but NO, we still had 5 miles to go. It’s always hard when you see the finish line and you can start to taste that burger in your mouth satisfying calories your body is now screaming for.

We did pass by a cool historical site, Interlaken, which used to be a resort here at the lakes in the late 1800’s. They definitely have done a good job of maintaining the structures, especially with how harsh the environment can be out here.

We made it to the end at 11:15 am. Now you would think our journey was over but the next step was just about to begin. We now needed to find a generous person to give two dirty, stinky and unshaven hikers a ride to Leadville about 17 miles away. The one thing in our favor was that where we exited the trail people were getting ready for the Leadville 100 mile mountain bike race the next day. So there was much more traffic there then what we would normally see. We started to walk up the road figuring we had to head that way anyway. The first truck rolled by and I quickly asked if it might be possible to get a ride if they were going our direction? They unfortunately weren’t but offered to give us a ride to the highway where our chances might be better. We were both very thankful as this cut out about a 3-4 mile road walk for us. Maybe this hitching thing wouldn’t be so bad.

We got to the highway at 11:20 and thanked the guys for the ride. They wished us luck and headed on their way. Figuring a woman hitch hiker was less intimidating than a guy we put Amy and her best smile out in front as our spokeswoman.

Well this is when things started to get funny. We sat there and watched car after car go by as we could see drivers straining to avoid eye contact. We had three people pull over but they were all heading the wrong direction. Anyone driving a high end car we were sure wouldn’t pull over for us so our attempts with them were pretty feeble. We started to wonder how long this was going to take after about 25 minutes and at least 40 cars going by. Then all of a sudden we hit gold. Not one but two cars pulled over offering rides. I talked to the first car while Amy went to the second. The first car was a Prius and the girl driving had a packed back seat. She was willing to take us but it was going to be a tight fit. The second car was an extra cab pickup with loads of room. So I quickly thanked her for the offer and told her the truck made more sense. I saw a wave of relief come across her face as she smiled and told me to have a safe trip. The truck was AWESOME!!! We met Matt and Deb who were about our age and we hit it off. The 25 minute drive not only to Leadville but to the airport, where we were picking up a car,was so fun. They questioned us about our trip we asked them about Leadville. They even offered to have us over to see there place and shower if we wanted. Obviously they really had no idea what they were offering to people who hadn’t seen running water in 7 days. We quickly declined as neither of us could do that to such nice people.

We got our car in the smallest airport ever and headed into town dreaming about food. Matt and Deb had told us about a pizza place that made us both drool. However when we got there the line was 20 people deep. No way our stomachs could wait that long. We found a small old diner car called The Melt and we each had a great pepper and pork melt sandwich!! Now that our stomaches weren’t threatening death we headed over to Matt and Deb’s after grabbing a thank you for the ride (beer from the local brewery).

As we headed over to their place the sky unleashed some of the biggest hail we have encountered. Matt hurried us into the garage for some shelter. They were hosting a bunch of riders for the race and we got to meet many of them which was very fun. Now a shower and more food was calling so we thanked them and headed to Frisco, CO for the night. 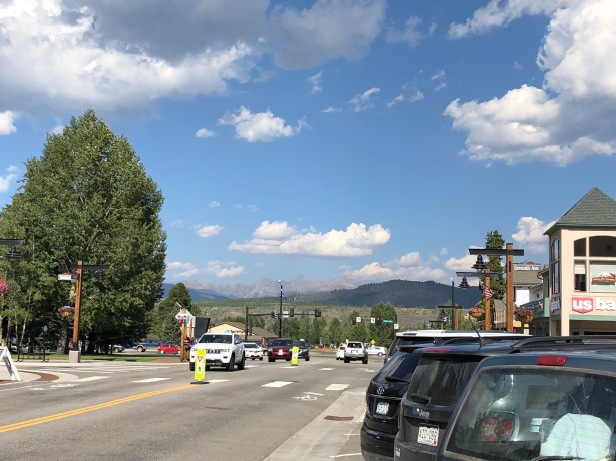 We got to Frisco about 3:00 and enjoyed a very long hot shower. Now it was time for more food. We had a great dinner replaying all the best parts of our trip together. Frisco is a very cute town with lots going on but much more touristy than Salida and Leadville. We both love so much about our visit to Colorado and will definitely have it on our radar for the future.

Now to start thinking about our next adventure!!

One thought on “Leaving the Rockies”