We decided to set the alarm this morning for 6:30 to try and get a jump on the day. Sleeping at 10,585 ft without tree cover made for a very cold night. That was confirmed when we check the temperature and found it was 22 degrees at 6:30. That means it must have gotten into the teens during the night. Everything was frozen including our bottles of drinking water. It was hard to do anything with water this morning because if it sat longer than a couple of minutes it started to freeze. The morning was beautiful though with no clouds or wind so the lake was perfect glass. 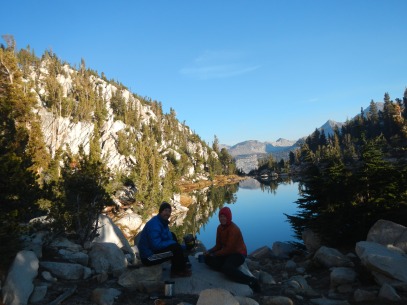 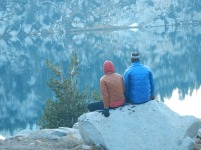 We sat and enjoyed the morning watching the sun rise over the mountain across from us. We had planned on hitting the trail by 8:30 but we got caught up taking a ton of pictures so we didn’t actually get on the trail until 9:00.  The plan was to head toward Duck Lake which would set us up for an easy exit on Monday.

After an hour down the trail we hit the trail junction for Peter Pande Lake. I decided to throw out a crazy idea. “What if we go see Peter Pande and then just try to get to Purple Lake.  Then we could get up early on Monday and hike out in the pre-dawn light.”  Amy agreed so just as usual for us our plans changed on the fly. The hike up to the lake was gorgeous. It was a literal winter wonderland. So much of the river coming down from the lake had completely frozen. When I say frozen I mean it was solid enough that we could have walked across some of it had we wanted to. We finally got to the lake around 11:30.

Wow what a treat!  Definitely the most picturesque lake we had seen all trip, and we had the place to ourselves. We spent an hour her having lunch and relaxing by the water.

When it was time to get going we went with the idea of going cross country to Olive Lake. It looked fairly easy and not to far. You would think we would learn by now. After several dead ends, back tracking and conversation of whether we were lost we found the trail 45 minutes later. Thank goodness for GPS which helped us find the unmaintained trail. Then another 45 minutes later we were back on our original trail for the day.

Now it was just down hill with really nothing excited to report but the possibility getting to Purple Lake before dark was getting slim. The trail down was a bit rough as it was covered with softball size rocks that were ankle breakers if you stepped wrong. That plus who ever made this trail must have been7 feet tall because the size of the steps were ridiculous!!  Once at the bottom we found a sandy stream to take a much needed break before going back up the 1,700 feet we had just descended. While here Amy had washed out a rag and was letting it dry since there wasn’t any wind. Well that was except the the big gust that came up 5 minutes later. This picked up the rag and threw it into the stream, but far enough out so that we couldn’t get it without going in.

It was now time to try and push for Purple Lake. We had 3.1 miles and 1,700 feet to cover. Amy turned to me and asked “Have we ever walked 2 miles an hour while going up steep elevation?”  The answer was no. With it being 4:00 we now threw on our packs and got back to it. That is until we found out 50 feet from where we took our break the trail required us to cross the river without a bridge or rocks to hop across. This meant we would have wet shoes the rest of the day and if the temps dropped again, ice shoes to wear in the morning. Knowing we were getting wet I ran back to grab Amy’s rag. Didn’t want to leave trash and we were getting wet anyway. So after the quick retrieval of the we both waded into the freezing river. By the time we crossed neither of us could feel our toes. 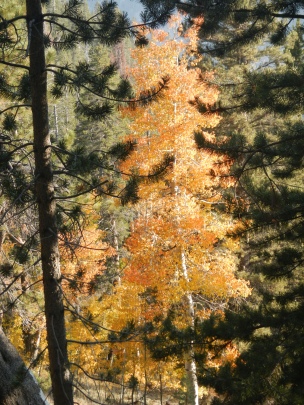 On the way up we had our really only wild animal sighting for the day as we came across another coyote. We all stood there string at each other for a minute before the coyote took off.  Miraculously we reach the top and a campsite at 5:30. That means we were able to hike at  2 mph while going up a steep grade. Guess we can say that we have done that now. We got to Purple Lake in time to set up camp and cook dinner before the sun disappeared. We are now in the tent at 8:00 as I try to finish up the blog before my eyelids get to heavy to allow me to focus. Tomorrow the plan is to get up before sunrise so we can try and cover the 9.1 miles to get to the truck by 11:00.